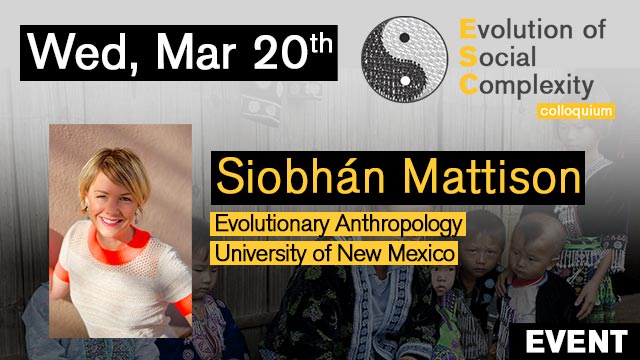 How central are males to human family systems?

Abstract:
Matriliny is a rare but recurrent system of kinship organization in both human and non-human animals. Problematized in humans for the tensions it creates for men, matriliny may also provide certain hedonistic benefits to men who take on relatively few household responsibilities. In this talk, I use data drawn from my studies of the Mosuo of Southwest China – the world’s only society to practice both patrilineal and matrilineal kinship as distinct modes of inheritance and descent – to muse about the possible costs and benefits of matrilineal kinship to men and women. I use evidence of daughter preference and daughter-biased investments to inform debates about social and ecological drivers of matrilineal kinship systems. Next, I introduce a new model that explores the effects of subsistence and the value of men’s labor on post-marital residence, showing that the shape of the return function affects whether men expend labor in their natal or spousal households. Finally, I extend this to develop a verbal hypothesis of female-centered kinship, which I call the “expendable male hypothesis”.

Bio:
Siobhán M. Mattison is an assistant professor of evolutionary anthropology at the University of New Mexico. Her research uses human behavioral ecology and demographic and quantitative methods in the study of kinship, social structure, parental investment, and health outcomes. Her fieldwork is conducted with the Mosuo (Na) of Southwest China and among the Melanesian Ni-Vanuatu. She has also explored data depicting the lives of Taiwanese living during the Japanese colonial administrative period (1895-1945), Indo-Fijians in contemporary Fiji, and the Chagga of Kilimanjaro. She received her doctoral degree in biocultural anthropology from the University of Washington and trained as a postdoctoral fellow in anthropology and demography at Stanford University. Her husband is not expendable, but many of her uncles have been.