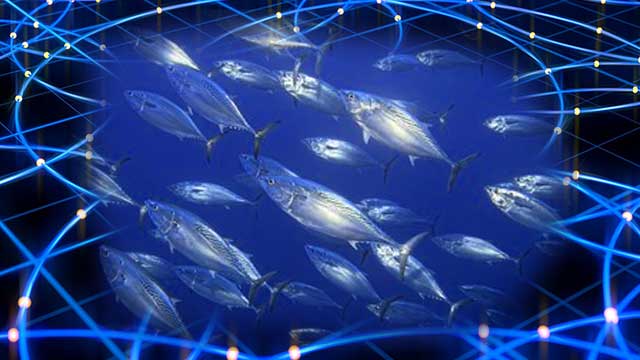 Individual and collective encoding of risk in animal groups

Across biology, groups process information in order to make better decisions. The inner workings of these collective computations are often difficult to tease out. For instance: How do groups of neurons in the brain gather and share information? How are hierarchies of power decided in monkey societies? Which aspects of a bird flock influence which direction the flock moves next?

A first step to understanding a group's behavior is to find which information guides individuals' behavior, and in particular where this information is stored. Information may be stored within individuals—a bird might remember a certain landmark along a migratory path, then push the rest of the flock in that direction. Alternatively, information may be stored in relationships among individuals—neurons can collectively store memories by changing the connections between them. In groups of animals, both types of information encoding might be present, but it has been difficult to separate the two.

In recent work with an international team of collaborators, ASU–SFI researcher Bryan Daniels helped to answer this question in schools of fish. Small fish called golden shiners will startle, suddenly changing direction, when nearby neighbors first startle. This behavior helps to avoid being eaten when one fish in the school notices a predator. Furthermore, if a fish is injured, it emits a mix of chemicals that communicates increased risk to the other fish, making them clump together more tightly and startle more frequently. Unknown was how this information about risk is encoded. In risky environments, do fish lower an internal threshold for startling, storing the information individually? Or might they change their behavior with respect to other fish, storing the information in the structure of the school and not within any one individual?

Daniels developed a mathematical model of startle cascades and used it to analyze data from hundreds of startle events observed in a school of shiners. The results, published recently by the team in PNAS, were clear: Information in the structure of the school was much more important than internal changes within individuals. "We're excited about this result because it's a beautiful example of how knowledge gathered by individuals can be accumulated into a sort of collective memory," says Daniels. "The computational strategies used in fish schools could help us understand similar processes in groups of neurons, social insects, or even humans."

Source: PNAS.org Proceedings of the National Academy of Sciences of the United States of America