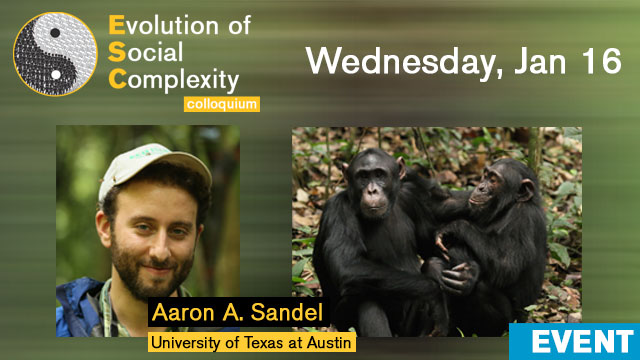 Social Relationships During the Transition to Adulthood in Male Chimpanzees

Social relationships during the transition to adulthood in male chimpanzees

Abstract: Strong social bonds play an important role in primate behavior and are prominent in the lives of adult male chimpanzees. Male chimpanzee "friends" form coalitions, share food, join each other on territorial border patrols, and help each other as they attempt to rise in the dominance hierarchy. Despite the importance of dominance and social bonds in adulthood, scant information exists regarding how they develop. Do these relationships emerge during adolescence? For one year, I observed male chimpanzees transitioning to adulthood at Ngogo in the Kibale National Park, Uganda. In contrast to adults, adolescent male chimpanzees do not compete for status with their peers. Instead, they prioritize affiliative relationships. Adolescent males form social bonds, including with material brothers, as do adult males. Unexpectedly, some of the strongest relationships formed by adolescent and young adult males promiscuously, there is no reason to suspect that chimpanzees can recognize their fathers or that fathers can recognize their sons. Relationships with old males and fathers are partly explained by the past associations and rank of older males when adolescent and young adult male chimpanzees were infants and juveniles. These findings raise the intriguing possibility that fatherhood in humans may have evolved from a chimpanzee-like social system.

Dr. Sandel is an Assistant Professor at the University of Texas at Austin. He has been studying the chimpanzees of Ngogo, in Kibale National Park, Uganda, since 2012, including for his PhD at the University of Michigan. His research addresses the nature of development of social bonds, what it means to be an adult, and the evolutionary function of adolescence. He is also interested in broader topics related to social cognition, romance, and hair.